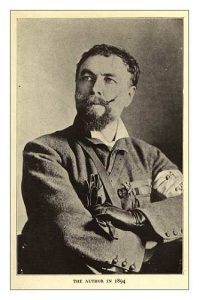 In November 1898, Frederic Villiers (1851-1922), the British war artist and war correspondent was in Govan. This was reported on page six of The Glasgow Herald, on Wednesday the 9th:

“KHARTOUM AT LAST.” – Last night Mr Frederick [sic] Villiers, the well-known war correspondent, lectured the Broomloan Hall, Govan, under the auspices of Govan Parish Young Men’s Literary Association. There was a very large attendance, and some time before the hour fixed for the meeting the doors had to be closed. The title of the lecture, which was illustrated by lime-light views, was ‘Khartoum at Last,’ and in it Mr Villiers traced the whole process of reconquering the Soudan [sic]. Mr John Wilson, M.P., presided, and, in introducing the lecturer, said the association had been lucky in obtaining for the first lecture of their course so distinguished a gentleman as Mr Villiers. Mr Villiers had just returned to this county after witnessing the fighting in the Soudan and the annihilation of the Khalifa and his hosts, which had once and forever destroyed the disgraceful slave traffic in Africa”

The article continues, with an account of the lecture’s content. At its conclusion, the Rev. John Brown moved for a vote of thanks to Mr Villiers.