An entry in the Dictionary of National Biography describes James Denholm as “one of the ablest of local chroniclers”, and as author of an Historical and Topographical Description of the City of Glasgow which was published in 1797, his work served as an important source for later writers. Subsequent and enlarged editions were published in 1798 and 1804. The title of the latter is The History of the city of Glasgow and Suburbs; to which is added a sketch of a tour to the principal Scotch and English lakes.

In addition to providing an account of Glasgow, Denholm included illustrations of prominent public buildings. including Hutchesons’ Hospital. Designed by David Hamilton, the building replaced the older structure, which stood on the Trongate. 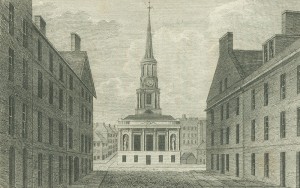 James Denholm drew the views, which were engraved by Robert Scott.