Mrs. Smith of Jordanhill and Mrs. Grant of Laggan

Isobel Smith, the wife of Archibald Smith of Jordanhill, was a friend and correspondent of Mrs. Grant.

Glasgow-born Anne Macvicar, Mrs. James Grant of Laggan (1755-1838), a writer, was described by Sir Walter Scott as a “woman whose tongue and pen are rather overpowering.” In 1779 she married the Reverend James Grant, who was minister of the parish of Laggan, Inverness-shire. She learned Gaelic, and wrote to her friends, providing accounts of the locals’ habits. After her husband died in 1801, she supported her eight children by writing about life in the Scottish Highlands. This was a subject which fascinated fashionable society at the time.

Silhouette Portrait of Mrs Grant of Laggan, by Augustin Edouart 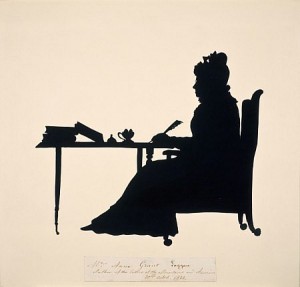