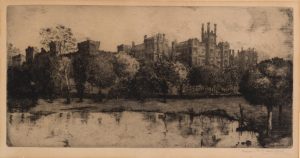 “Among the numerous centenary festivals which we have to chronicle, that by which the anniversary of the poet’s birthday was commemorated at Gartnavel possesses a peculiar interest. On Tuesday night a number of the patients assembled in the library of the institution, and under the presidence of one of the gentleman patients, resident in the establishment, supported by Dr. Mackintosh, Drs. Cameron and Caskie, croupiers, celebrated the occasion by a banquet. There was nothing in the arrangements that could have led a spectator to infer that the festival took place within the walls of such an institution.

“In proposing the toast – “The Immortal Memory of Robert Burns,” the chairman said that the unparalelled [sic] tribute which is this day paid to his genius and writings throughout the world, must convince us of the perpetuity of the name of Robert Burns, the Ayrshire poet. We have at this day a vivid recollection – by their writings – of authors and poets, in the persons of Homer, Horace, Virgil, and Ovid, who flourished two or three thousand years ago; but, gentlemen, so long as Scotsmen shall inhabit this globe, with any love of national spirit or renown, Burns and his ‘Scots wha hae wi’ Wallace bled,’ his ‘Cottar’s Saturday Night,’ and his many other poems and songs, will never, never be forgotten. We have had national holidays and rejoicing on particular occasions, but these did not extend beyond the limits of the British Empire; but this festival, gentlemen, will be celebrated in the remotest quarters of the globe. Wherever a few Scotsmen are located, they will assemble, and rejoice that their country has been so highly honoured as to give birth to so distinguished a poet, and drink, as we now do – ‘To the immortal memory of Robert Burns.’

“Other appropriate toasts and songs passed gaily around, as at any respectable dinner party. Many and great as are the social, scientific, and political changes which have occurred since that stormy night when the rude

Blew hansel in on Robin,’

“perhaps no change has taken place more gratifying to the feelings of the philanthropist, or which would have been hailed with more delight by him who felt so strongly, that

“than that which has been wrought on such institutions as Gartnavel. Could a citizen of London, in the year of grace, 1759, who had paid his fee to see the wretched inmates of Bedlam, or St. Luke’s, just as he had done to see the wild beasts at the Tower (although in the latter case his money would have procured him a far more pleasant site), have revisited ‘the pale glimpses of the moon,’ and could he have been indulged with a place at the Gartnavel festival, we question whether his astonishment at the spectacle there presented to him would have been surpassed by that produced in his mind by any of the material marvels of the nineteenth century, embracing though these do the steamship, the locomotive, and the electric telegraph.”