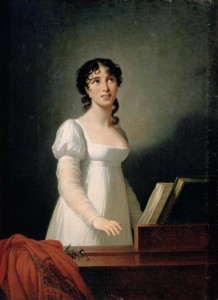 Angelica Catalani was an Italian opera singer, and a soprano of nearly three octaves in range. Its unsurpassed power and flexibility made her one of the greatest bravura singers of all time. She received her first engagement at  Venice’s La Fenice, in Johann Simon Mayr’s Lodoiska, and made her debut in London in 1805/6, and was Susanna in the first London production of Mozart’s Le Nozze di Figaro.

She performed in Glasgow on numerous occasions.