Angelica Catalani in Glasgow in 1810 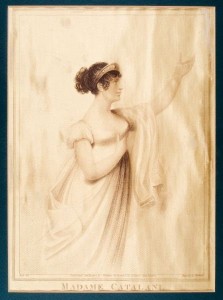 In January 1810, the Glasgow Herald announced that Angelica Catalani was to perform at the Theatre Royal, on Queen Street. This renowned Italian soprano made her debut in 1806, in London, in  La Morte di Semiramide, in 1806, a work specially written for her by Marco Portogallo (Marcus Portugal 1762-1830).

On the 22nd of January 1810, page 3, the Glasgow Herald commented under the heading Theatre: “The Managers deserve the highest praise, for the solicitude they have evinced in rendering the entertainments at the Theatre so very complete. Although the terms upon which Madame Catalani is engaged must no doubt be very high, no alteration in the prices,as used formerly to be the case, is to take place. – The bill of fare for this evening presents a treat which must highly gratify every musical and theatrical amateur; and it is believed that, were the Theatre, large as it is, double the size, it would be completely filled; the application for boxes, in particular, being numerous beyond any former precedent”.

At the end of the second act of The Belle’s Stratagem on the 22nd, Catalani would perform a Grand Bravura Song; the favourite air of Oh Dolce Concento, after the fourth act; and the favourite song Cease your Funning, performed in English, after the comedy.