CATEGORY MENU
You are here » Glasgow's Cultural History » Music » Concert of Sacred Music, by the Foundry Boys’ Choir, in the Ewing Place Church, on Thursday the 5th of May, 1887

Concert of Sacred Music, by the Foundry Boys’ Choir, in the Ewing Place Church, on Thursday the 5th of May, 1887 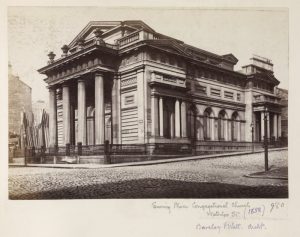 Ewing Place Church, which was located at the corner of Waterloo Street and West Campbell Street.

“FOUNDRY BOYS’ CHOIR.- Last night the choir of the Christian Institute branch of the Glasgow Foundry Boys’ Religious Society gave a concert of sacred music in the Ewing Place Church. Unfortunately the audience was not large, but it was enthusiastic. Being the jubilee year the programme was appropriately opened by the National Anthem. The first part of the programme embraced selections from Rossini’s ‘Stabat Mater,’ the solos being rendered by Misses M. Duffus and Lizzie Roxburgh and Messrs Seligmann and Gibson; but it was to Mendelssohn’s ‘Athalia’ that the best efforts of the choir were given. They had evidently studied the music with great care, and though there was a slight hesitancy manifested at the outset that gradually disappeared, before the close the chorus gained more confidence. It was observed that the attack was more decided in the forte passages, but where softness and delicacy were required there was not the same steadiness. As a whole the effort was a very commendable one, inasmuch as it imparts to the young people a love of higher class music, and leads them on gradually to work of a more testing character. Mrs Bannerman and Misses M. Duffus and Lizzie Roxburgh were the soloists, and Mr A. P. Roxburgh reader, while the presence of Mr Allan Macbeth at the pianoforte and Mr W. T. Hoeck at the harmonium was a sufficient guarantee of the excellence of the accompaniments. Mr Andrew Myles, who wielded the baton, may be congratulated on the successful manner in which his choir passed through a somewhat trying ordeal.”