CATEGORY MENU
You are here » Glasgow's Cultural History » Music » Entertainments for the People and the Society for Social Reform, December 1860

Entertainments for the People and the Society for Social Reform, December 1860

A short notice on page two of The Glasgow Herald, on Thursday the 6th of December 1860, reads:

“ENTERTAINMENTS FOR THE PEOPLE. – A plan has recently been organised by the Rev. Henry Calderwood, of Greyfriars’ U.P. Church, which has for its object the amelioration of the condition of the people in the crowded districts of the city, by presenting counter attractions to the dram shops and saloons, by providing a series of cheap and attractive entertainments. Music, both vocal and instrumental, interspersed with readings from standard works in history, biography, travel, and general literature, is the means to be used; and the movement will be directed by a ‘Society for Social Reform,’ which is expected to be organised on Monday the 17th inst. It is proposed that an orchestra of professional musicians should perform four nights each week, in different parts of the city. Three halls have already been secured, free of charge. The sum of £200 has been raised; and we understand a subscription of £300 will start the effort.”

Henry Calderwood (1830-97), a Scottish minister and philosopher, studied for the ministry in the United Presbyterian Church of Scotland. He was ordained pastor of the Greyfriars’ Church in 1856. 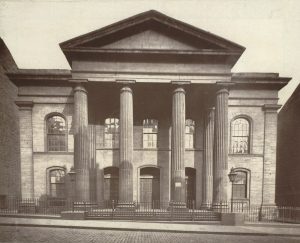