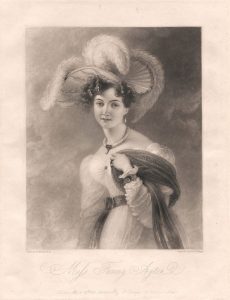 Page two of the Glasgow Herald, Friday March the 19th, 1830, has a large advertisement for a Grand Evening Concert of Vocal and Instrumental Music, at the Assembly Rooms, on the 22nd of March. It featured Miss Fanny Ayton, assisted by Mr. Murray of Edinburgh, “whose high merit as a Violin player is well known” and “Mr. Wilson, of Edinburgh, the most accomplished Tenor Singer in Scotland.”

The concert was under the patronage of the Hon. the Lord Provost of Glasgow, and the Right Hon. Lord Douglas. Its directors included: R. D. Alston; Arthur Connell; James Ewing; John Finlay; James Smith, Jordanhill; James Smith, Craigend; and Professor Towers. The programme was divided into two acts, featuring Scottish songs and popular ballads; arias, cavatinas and duets by Rossini and Pacini; along with a Fantasia, and a “Scotch air, with variations”, on the violin. Tickets cost five shillings each, and were available at Mr. Finlay’s, 9 Miller Street.

There is a notice referring to the concert, in the Herald, Monday 22nd of March, page two.

“We learn, with pleasure, that Miss Fanny Ayton’s concert, of this evening, will be attended by all the beauty and fashion of this city, and will be the most brilliant assemblage witnessed here for many years. Indeed, the request that Miss Fanny Ayton should give a concert at this time came from several families of the first respectability; and consequently many of our most accomplished and elegant females condescended to use their influence in distributing tickets on this occasion. … A Nobleman of high taste and talent, long acquainted with all the first singers of Europe, writing to one of the Directors of this Concert, observes, ‘These Gentlemen, and the Ladies and Gentlemen of Glasgow, do credit to their taste in admiring Miss Fanny Ayton, who certainly is an artiste of very distinguished talent and acquirement, and has been universally acknowledged as such by all those competent to appreciate her merits.”