CATEGORY MENU
You are here » Glasgow's Cultural History » Music » Glasgow Asylum for the Blind, Soiree and Concert, in the Trades’ Hall, Glassford Street, on Wednesday the 15th of April, 1891

Glasgow Asylum for the Blind, Soiree and Concert, in the Trades’ Hall, Glassford Street, on Wednesday the 15th of April, 1891

“GLASGOW ASYLUM FOR THE BLIND.- A soiree [sic] and concert in connection with the Asylum for the Blind was held last night in the Trades’ Hall, Glassford Street. There was a large attendance of workers and inmates of the asylum and their friends. Sir John Neilson Cuthbertson presided, and among others present were Bailie Morris, Messrs George Younger, J. Carfrae Alston, Balmain, and Robertson, Helensburgh. After tea, the Chairman, in the course of a short address, referred to the prosperous condition of the institution. and said that the School Board took a deep interest in the young people connected with the Blind Asylum and other institutions of a similar kind. Nowadays, he said, everybody wanted a good education, and he trusted that these young people would not only get a good education, but know how to value it. He held that the first education a child should get was a Scriptural one, and without that all the other education that could be got was of comparatively little use. He had reason to know that these difficulties had been surmounted, and through different appliances the young people at Castle Street were getting just as good an education as their brothers and sisters in the public schools. An excellent concert was afterwards given.” 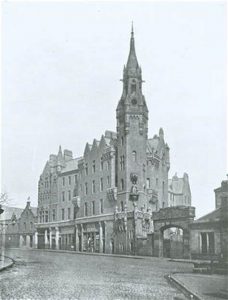