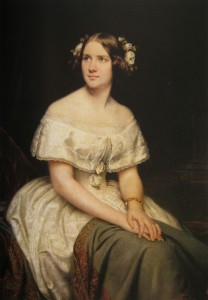 Johanna Maria “Jenny” Lind was a Swedish opera singer, often called the “Swedish Nightingale”. She was one of the most highly regarded singers of the 19th century, and her operatic repertoire comprised the title roles in Lucia di Lammermoor, Maria di Rohan, Norma, La Vestale, as well as Susanna in The Marriage of Figaro, and Alice in Robert le Diable.