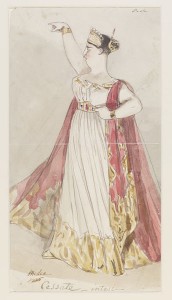 The Italian soprano Giuditta Pasta was born in Saronno, in 1797, and studied with Giuseppe Scappa in Milan, where she made her debut in 1815 in his Le Tre Eleonore. She appeared at the King’s Theatre in London, in 1817, performing the title-role in Cimarosa’s Penelope. However, her first triumph was as Desdemona in Rossini’s Otello, in Paris in 1821. Pasta regularly performed in London, Paris, Milan and Naples between 1824 and 1837. and became renowned for the role of Amina in Bellini’s La Sonnambula, which she created in Milan in 1831. The title-roles of Donizetti’s Anna Bolena, in 1830, and Bellini’s Norma, in 1831 also were written for her.

In modern times, she has been compared to Maria Callas, who sang much of Pasta’s repertory.