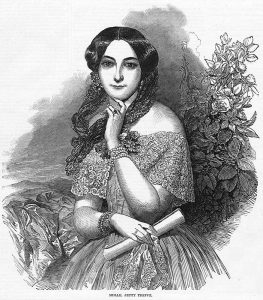 Portrait from The Illustrated London News, 16th of November 1850.

Henrietta “Jetty” Treffz (1818-78), a mezzo-soprano, was best-known for being the first wife of Johann Strauss II. In 1849, she made her debut in England, in concerts alongside Johann Strauss I. Her performances were very well received and critically acclaimed.

Advertisements in January 1850, informed music lovers in Glasgow that she would be participating in “M. JULLIEN’S ANNUAL TOUR MUSICALE,” and would be at the City Hall on Tuesday the 15th, and Saturday the 19th. The adverts, such as the one of page three of The Glasgow Herald, on Friday the 11th of January, detail the contents of each concert, ranging from Rossini’s William Tell overture, to works by Jullien, along with Treffz’s performance of the aria “Vedrai carino” from Mozart’s Don Giovanni, as well as German, English and Italian songs.

The Herald’s review of the Tuesday concert was published on page two of the Friday the 18th edition, and reads:

“Mons. Jullien’s Concert.– On Tuesday evening, M. Jullien gave his first concert this season, in the City Hall, to one of the largest audiences he ever had in Glasgow. We believe the crowd may be accounted for from the loud report which heralded the coming of Jetty Treffz. Her singing of the German song ‘Trab, Trab,’ had created such an enthusiasm in London, that every journal sent her fame through all parts of the country. Now, however, that we have heard her, we are not prepared to join so enthusiastically in the outcry. Her voice is fresh and clear, but exceedingly unpolished. She sings like any ordinary young lady who had not undergone a serious course of tuition. We did not perceive that heartiness and spirit which we had expected; and after having so recently heard Signora Montenegro and Madame Sontag, we cannot regard her as by any means a first-class singer. In ‘Vedrai carino‘ her manner was as tame and unimpassioned as we could conceive it possible for a public singer’s to be; and when she gave ‘Sweet Home,’ she was wrong in expression, and frequently false in quantity. Probably, the immense size of the City Hall had some effect upon her, but even ill adapted as it is for musical purposes, it could scarcely have been the sole cause of what we have referred to. As usual, M. Jullien’s band was in first-rate order. We were much pleased with the Hungarian Quadrille which was given for the first time in Glasgow. The subjects were new, and very effective, more especially the National Hymn, with which it concluded. We have not space to notice the remaining portions at length, but we cannot conclude without mentioning, that another concert will be given to-morrow evening when M. Jullien will certainly have a bumper.”