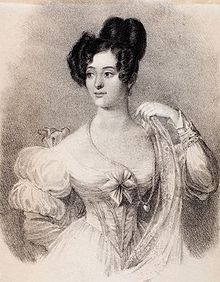 Marietta Brambilla, a contralto, accompanied Pasta during her performances in Glasgow. She made her stage debut in 1827, singing the role of Arsace in Rossini’s Semiramide, at the King’s Theatre, London. She made her debut at La Scala, in 1833, in the world premiere of Donizetti’s Lucrezia Borgia, as Maffio Orsini, a role written specifically for her. The composer also composed Pierotto in Linda di Chamounix for her.

Marietta was the eldest of five sisters, all of whom became opera singers, and she created a number of male character roles en travesti.

The advertisements, notices and articles in The Glasgow Herald in 1827, misspelt her name as “Brombella”.