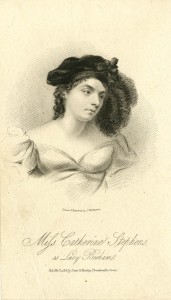 In the Glasgow Herald, on Monday the 11th of November 1822, are a notice on page two, and an advertisement on page three.

“Theatre – But two nights are left of Miss Stephens’s engagement. On Thursday she commences a new engagement in the North; so that there is not the smallest hope of her performing a single night beyond the period first specified. To-night and to-morrow night are the only opportunities we can enjoy – at least for a considerable time – of witnessing the equally touching and brilliant effect with which she executed some of the most enchanting strains in the operatic department of our Drama. It is our duty to say that that part of our public who are accustomed to frequent the dress side of the Theatre, have upon this occasion done ample justice to their own good taste and fair liberality. The lower boxes have been crowded every night. Our fashionables – as they ought – have taken the lead in the cause of public merit and private desert.”

The celebrated National Opera of Guy Mannering, was performed on Monday the 11th, with  Mr. Leoni Lee as Henry Bertram; Mr. Calcraft as Colonel Mannering; and Miss Stephens as Lucy Bertram. The advertisement noted that, in the character of Henry Bertram, Mr. Lee would introduce the following songs: If yae Highland Laddie Meet; The Maid of Woodbourne Valley; and It was Dunois the Young and Brave; the Words by Sir Walter Scott, Bart.

As Lucy Bertram, Miss Stephens would introduce the songs: Auld Robin Gray: Rest Thee Babe, Rest Thee Babe; and Charlie is my Darling. In the course of the evening, she would sing The Soldier Tir’d.