CATEGORY MENU
You are here » Glasgow's Cultural History » Music » Review of the Jubilee Singers’ Concert in St Vincent Street U. P. Church, on Tuesday the 28th of October, 1873

Review of the Jubilee Singers’ Concert in St Vincent Street U. P. Church, on Tuesday the 28th of October, 1873

Please note before reading the article below, that it contains words and terms, in common use in the nineteenth century, which may offend 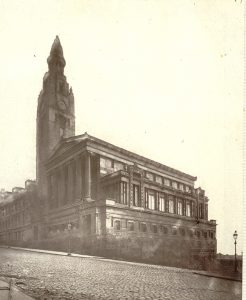 An article on page four of The North British Daily Mail, on Wednesday the 29th of October, 1873, reads:

“THE JUBILEE SINGERS. – The concert given by these minstrels last night in St Vincent Street U. P. Church

(the Rev. Mr Rennie’s) was quite as successful as any of its predecessors in this city. The spacious place of

meeting was crowded to overflow, and the audience evinced a most sympathetic yet discriminating appreciation

of the music which was performed. The pastor of the church presided, felicitously introducing the singers, and

now and again suggesting how they should meet the enthusiastic re-demands to which they were subjected. Of

the performances altogether, it is enough to say that they exhibited all the characteristics which have already

been described in these columns. The sweetness of the voices, the exquisite manner in which they were blent, the

precision of every movement, and that marked union of simplicity and sincerity which gives to the music so

much of real and vivid expression, quite ennobling the words which are sung – all were admirably illustrated. At

the close Professor MacMichael proposed a vote of thanks to the chairman, which was passed by acclamation, and

it was intimated that the farewell concert will be given on Saturday afternoon in the City Hall.”