CATEGORY MENU
You are here » Glasgow's Cultural History » Music » Sam Cowell’s First Appearance in Glasgow, after Three Years, at the City Hall, on Saturday the 7th of June, 1856

Sam Cowell’s First Appearance in Glasgow, after Three Years, at the City Hall, on Saturday the 7th of June, 1856 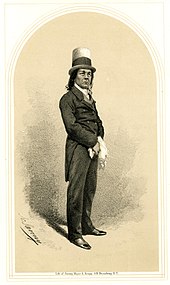 On the second of June, 1856, a short notice on page five of The Glasgow Herald reads:

“Sam Cowell. – The lovers of genuine humour and fun will be pleased to know that Mr. Cowell, the inimitable English comic vocalist, is to be in this city on Saturday first. Mr. Morison Kyle has made a short engagement with the great London favourite, and his first appearance, when he will sing a number of his choicest serio-comic ballads, is to take place in the City Hall on the evening above specified. There never was any comic singer so much admired in Glasgow as Sam Cowell. On every occasion when he came on the stage or the platform here he always succeeded in pleasing his auditors. And now, after so long an absence, when he is to make his bow to his old friends, we trust he will meet with a crowd of merry faces.”

An advertisement on the front page of the same edition of the Herald provides more details. Cowell’s performance was part of the Saturday Evening Concerts, arranged for the City Hall, in June, and under the management of Morrison Kyle. During the evening, the artist would sing seven songs, and a “Host of other Artistes” were engaged to perform. Tickets cost: sixpence; one shilling; and one-shilling-and-sixpence. They were available, along with programmes, at Mr. Kyle’s on Buchanan Street.

A short notice in the Herald, on page seven, on the ninth of June, comments:

“Sam Cowell. – This old favourite appeared on Saturday evening last in the City Hall, at the first of a series of concerts which are to be held under the auspices of Mr. Morison Kyle. The hall was crowded. Sam was bright and brilliant as ever, and the audience was fairly carried into heroics by his comic melodies and droll impersonations. He was very ably supported by Mons. de Valadares, the American harmonists, and other performers. We must confess that the conduct of some of the low-priced audience was the reverse of respectable, and as to the encores, they were carried to the point of cruelty to singers. We have no doubt Mr. Kyle will see these matters amended in future.”