Scotch Ballads, Sung by Mr. Robson, at the Dinner and Presentation to Isaac Dodds, Esq., November 1850 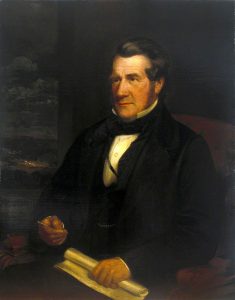 Portrait of Isaac Dodds (1801-1882), by an unknown artist. Reproduced, courtesy of the Science Museum/ Science and Society Picture Library, London.

A short article, on page two of The Glasgow Herald, on Friday the 29th of November, 1850, reads:

“DINNER AND PRESENTATION TO ISAAC DODDS, ESQ. OF ROTHERHAM.

A numerous party of gentlemen met to do honour to Mr. Dodds, at dinner, on

Monday last, the 25th instant, in the North British Hotel; M. A. Muir, Esq. in

the chair, W. A. Matthews, of Sheffield, croupier.

After the usual loyal toasts, the Chairman, in name of the subscribers, presented

their guest with an elegant Gold Snuff-box, containing 350 sovereigns, and in

most appropriate terms alluded to the high esteem in which Mr. Dodds was held

Messrs. John Stephenson & Co., while carrying on and completing the great

railway contracts of that company in Scotland. The box bore the following inscription :-

Mr. Dodds replied to the toast with great feeling, and took occasion to state of all those

with whom he had anything to do in the carrying on the works alluded to by the Chairman,

there did not exist a man to whom he could not extend the right hand of fellowship.

of the kingdom, were given in a style exhibiting the highest intelligence. Some of our finest

Scotch ballads, sung by Mr. Robson in his very best style, had a charming effect on the

entertainments of the evening. Mr. Josez, of the ‘North British,’ displayed his usual good

Francis Josez is listed on page 160 of The Post-Office Annual Glasgow Directory for 1849-1850, at: “North British hotel, 7 North Queen street.”