CATEGORY MENU
You are here » Glasgow's Cultural History » Music » The Jubilee Singers Conduct a Missionary Service at the East Campbell Street U. P. Church, on Sunday the 5th of October, 1873

The Jubilee Singers Conduct a Missionary Service at the East Campbell Street U. P. Church, on Sunday the 5th of October, 1873 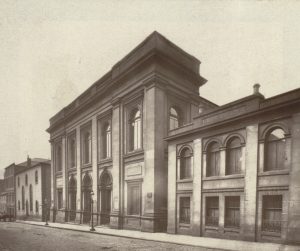 East Campbell Street United Presbyterian Church, Calton, in 1875. The church, which was designed by Haig and Low, in the style of an Italian Renaissance Palazzo, had 1,400 sittings.

On page four of The Glasgow Herald, on Monday the 6th of October, 1873, is the following notice:

“THE JUBILEE SINGERS.—A missionary service conducted by the Jubilee Singers, was held at

East Campbell Street U. P. Church last night. The church was crowded in every part, and after the

lobbies and staircases had been filled, hundreds who applied for admission had to go away

disappointed. The service was an exceedingly interesting one. The Rev. Dr Wallace, pastor of the

church, acted as director of the proceedings, and delivered a brief address, cordially commending

the Jubilee Singers and their mission; and one of the members of the company also addressed the

meeting. The hymns, rendered with all the pathos and simplicity by which the musical performances

of the Singers are characterised, were obviously highly appreciated by the large audience; and

altogether the ‘service’ was very successful.”