In his regular ‘Stamp Album’ feature page in the Saturday issue of The Herald, Gavin Stamp’s contribution on the 27th of November, 1993, page 13, concerns a proposal to erect a Robert Adam-Gianbattista Piranesi monument on the raised plinth, on the Trongate, where the Glasgow Cross Station once stood, above the subterranean railway line.

1992 was the anniversary of Adam’s death, and Stamp points out that there was no monument to him. His built work in Edinburgh was testament to his genius, but the author considered that as Glasgow had lost the Professors’ Lodgings, and Royal Infirmary, and only had the Trades’ House façade on Glassford Street, and the surviving fragment of the famous Ingram-Street Assembly Rooms, removed, reconstructed, and renamed the McLennan Arch, now Glasgow had “an opportunity not only to redeem this shame, but also to pay proper tribute to one of Scotland’s greatest sons.”

Alexander Stoddart (b. 1959), the “would-be sculptor”, envisaged a “forcefully contrived segment of classicising architectural ruination”, with massive, rusticated blocks of concrete. This was designed to support two 12-foot high heroic bronze figures. Stamp’s article has an illustration of the proposed monument. The inclusion of Gianbattista Piranesi (1720-78), the renowned Italian artist who shared Adam’s passion for Antiquity, was logical. Their special relationship was symbolised by Piranesi’s exceptional decision to dedicate his folio Il Campo Marzio dell’ Antica Roma, 1762, to the Scot. 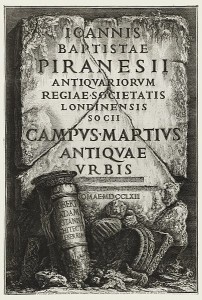 One of the pages is adorned with twin overlapping portraits of Adam and Piranesi, and Stamp considered the proposed monument would celebrate their momentous historical connection, and also proclaim “Scotland’s – and Glasgow’s – strong classical tradition and the fruitful cultural exchange with Italy, as well as Glasgow’s status as a European city.”

At the time Stamp’s article was published, The Robert Adam Monument exhibition was at the Royal Incorporation of Architects in Scotland, in Edinburgh.

“It seems perverse that Glaswegians who want fully to comprehend the manner in which the ancient core of their city could be enhanced by this remarkable project are obliged to go through to Edinburgh to see the model. It ought to be exhibited in Glasgow. More to the point, it ought to be built in Glasgow.”

The monument never was commissioned.