On Tuesday the 14th of March, 1905, The Glasgow Herald has a notice, on page six, which is headed and reads:

“BESSIE MACNICOL’S PICTURES. – Messrs Craibe Angus & Son are showing in their Hope Street gallery a collection of pictures by the late Bessie MacNicol, a Glasgow artist whose death last year was much lamented. She was little over 30 years of age. Her career as an artist did not extend beyond a dozen years, yet in that brief space she painted a great many pictures, all of them good, some of real distinction. The present collection is doubly interesting, inasmuch as it shows the entire trend of her art, from its beginning till its premature close – from her first two little works, ‘St Monan’s’ and ‘A Fife Harbour’ to her accomplished ‘Vanity,’ a study in the semi-nude, which was shown in an exhibition of the Glasgow Society of Artists. The first two renderings of the fishing villages of St Monan’s and Crail are exceedingly strong for a beginner, and show at once her sense of colour and skill in draughtsmanship. ‘Vanity’ is a young woman naked to the waist, her back to the spectator, as, awaking in the morning, she surveys her charms reflected in a hand mirror. The flesh painting is wonderfully fine and subtle. Between these extremes of her art Bessie MacNicol turned out pictures at first cast in low tones, but gradually emerging into clearer light. In this middle period she painted bust portraits of girls, set against backgrounds of foliage and flowers, and such dainty imaginations as ‘Phyllis in Town’ and ‘The Leghorn Hat.’ ‘Deborah,’ one of her latest works, is the full-length of a lady, in which the handsome figure is treated with conspicuous ability. It was shown in Glasgow last year. Only one of her works, ‘The Joiner’s Shop,’ found its way into the Royal Academy. It is an essay in light and shadow, wonderfully clever to be the work of so young an artist. Later and abler canvases did not find acceptance at Burlington House, nor had she any encouragement from the Royal Scottish Academy. The Glasgow Institute, however, recognised her high merit. ‘Motherhood,’ one of her most sympathetic and powerful readings, is in the Exhibition of the present season. Much of her work was seen abroad, and both in America and on the Continent it was highly appreciated. Bessie MacNicol was richly dowered. She had ambition, and painted with conscience as well as with intellect. Her manner was not feminine, but masculine. She had high, clear ideals, and every year her power of realisation advanced. She accomplished much. If her art-career had not been cut short, it is hard to say how far she might have gone in portraiture, in decorative pictures of sunlight and the figure, in delicate and delightful colour harmonies. In the collection now on view there are 35 oils, two pastels, and eight water-colours. One of the drawings, ‘A Distinguished Visitor,’ is very charming in delicacy and in the grace of the curtseying figure.” 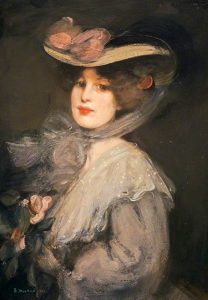 Bessie MacNicol, Portrait of a Lady: Phyllis in Town, 1904, oil on panel, reproduced courtesy of the National Galleries of Scotland.