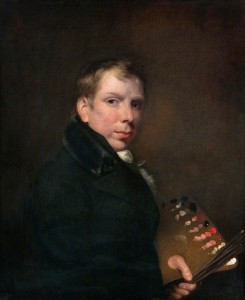 Andrew Henderson was born in Cleish, the son of the gardener to William Adam of Blair Adam. He spent some time in London, where he studied art, then moved to Glasgow in 1813, and established himself primarily as a portrait painter. He is listed on page 72 of the 1814 Glasgow Directory as: “portrait-painter, 24, Ingram-street.” Henderson had a successful career, and his sitters include his friend William Motherwell, the poet, and Thomas Atkinson.

As noted elsewhere on this site, Henderson was instrumental in the founding of the Dilettanti Society in 1825, and he was a regular contributor to its annual exhibitions, from 1828 to 1834. He died in April 1835, and that year’s exhibition had one work, the portrait, illustrated above, “painted by Himself in 1815 – the property of William Young, Esq. M. D.” The catalogues provide useful names of the sitters he painted, and his other subject pictures.

Scottish Proverbs, Collected by Andrew Henderson, with an Introduction by William Motherwell, was published in 1832, by Glasgow’s David Robertson; Oliver and Boyd in Edinburgh, and London’s Longman, Rees, Orme, Brown, and Green. It was printed by Bell and Bain in Glasgow. Henderson inscribed and dedicated this work to his friend, Dr. William Young, a fellow-founder of the Glasgow Dilettanti Society. The artist produced six illustrations to accompany the text.

A biographical sketch is in the 1863 edition of The Laird of Logan; Or, Anecdotes and Tales Illustrative of the Wit and Humour of Scotland, along with those of his fellow contributors, John D. Carrick and William Motherwell, to the first edition, known as The Laird of Logan; Or Wit of the West. which was  published in 1835, by David Robertson.