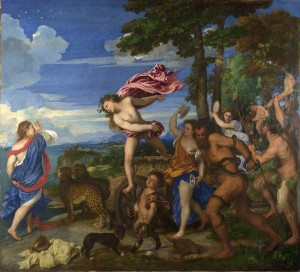 In 1968, the National Gallery in London was in the process of having Titian’s celebrated painting, Bacchus and Ariadne, cleaned. In his article for the Scottish Art Review, Colin Clark commented that the painting’s value had been assessed as high as £10,000,000, and pointed out that “it is interesting to that but for a native of Glasgow it would never have reached England.” page 27.

“Its acquisition in 1806 was one of the early coups of William Buchanan, connoisseur, art dealer and author. During the first quarter of the nineteenth century he was the leading importer of Old Master paintings from the Continent. It has been said of him that no one individual did so much to enrich the stock of fine paintings in England.” These include works by Rubens, Velazquez and Murillo, which are in the National Gallery in London.”

“Buchanan was a member of the Buchanans of Ardoch, Dumbartonshire [sic]. His father, Thomas, was a leading Glasgow banker and merchant who conducted a flourishing hat-making business. William was the second child of Thomas’s marriage (his third) to Helen Graham. Born at Dalmarnock in 1777 he matriculated at Glasgow University in 1789. Thereafter he studied law in Edinburgh and in 1802 was admitted Writer to the Signet.”