Exhibition of Pictures by Robert Cree Crawford, at the Institute of Fine Arts, McLellan Galleries, October 1907

The exhibition of pictures by Robert Cree Crawford (1842-1924) was advertised in The Glasgow Herald. The advert on page eight of the paper, on Monday the 7th of October, 1907, is positioned below one informing readers that an exhibition of works by Arthur Melville R.W.S, A.R.S.A, would be held in the same month.

On Friday the 11th of October, the Herald has a column titled “ART SHOWS IN GLASGOW,” on page ten. There are two reviews, and Robert C. Crawford’s is first. The other is of an exhibition of sporting pictures by G. Denholm Armour, at the Renfield Street Gallery of Messrs. James Connell and Sons.

The paper’s critic comments that Crawford’s art “deserves to be more widely known,” and acknowledges that “frequenters of picture exhibitions”, such as those of the Institute in Glasgow, and “similarly important walls,” already are familiar with the artist. In the writer’s opinion:

“Mr Crawford, though a sincere practitioner in the world of the fine arts, is by nature unaggressive; he perhaps lacks pushfulness in the commercial sense, which is to his credit if not to his profit. However, there is now opportunity for lovers of art to make better acquaintance with his work. In one of the galleries of the Royal Glasgow Institute – a busy place these days – he has brought together over 100 of his paintings. These represent the harvest of many years, and they afford proof of a quite extraordinary versatility. Most artists are content to labour in one corner of the vineyard; Mr Crawford has roamed in it. He is a portraitist, and paints seascapes as well as landscapes. It would be thoughtless praise to say that in these departments he shows equal power; but in all of them he displays admirable facility. He is not daring nor unconventional; the old methods suffice; his work is straightforward and thorough.”

There follows a discussion of a number of exhibits, such as “the picture of a dark-haired beauty”; Sunset in Bute; Blind Man’s Bay; Ardgoil from Portincaple; After the Bath; An Ayrshire Lass; and The Water Stoup.

“Mr Crawford is perhaps chiefly in his element when he paints the sea, and particularly the sea in storm. One of the most spacious, as it is perhaps the finest picture in the collection, is ‘Storm at Portincross.’ There is a fine suggestion of reality about the white-crested waves. It is satisfactory to learn that this work is to become the property of the city. It has been purchased by Mr George J Kidston; who has generously decided to gift it to the municipal collection.” 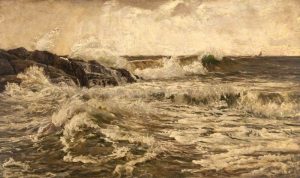 The review concludes: “This is as comprehensive a one-man show as has been witnessed in Glasgow, and should not be missed by visitors to the Institute.”