In November 1844, John Finlay informed the public that he had “Mr. BIARD’S Celebrated picture of a SCENE ON THE COAST OF AFRICA. lately beautifully engraved by Mr. Wagstaff.” Advertisements, such as one on page three of The Glasgow Herald, on Monday the 11th of November, mentioned that: “The object of the painter of this picture has been to represent, faithfully, a portion of the details of the progress of slave-dealing on the coast of Africa.”

The painting, known now as The Slave Trade (Slaves on the West Coast of Africa), was painted by François-Auguste Biard (1799-1882). The entry for the painting on the www.pbs.org website in the ‘Africans in America’ section, comments that the work was painted when slavery still was legal in the French colonies and that it is a “strong statement against the institution.” 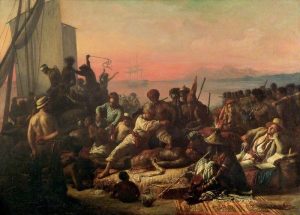 Reproduced courtesy of the Wilberforce House Museum, Kingston upon Hull

On the 18th of November, the Herald reviewed the painting:

“Picture of a ‘Scene on the Coast of Africa.’ – We had the other day the pleasure of inspecting Mons. Biard’s celebrated picture of a ‘Scene on the Coast of Africa,’ which is now being exhibited at Mr. Finlay’s Picture Gallery, Buchanan Street. It tells a tale of the horrors of the slave trade more eloquent and touching than words can convey. In the foreground of the picture the chief, who has kidnapped and sold his countrymen, is seen smoking his hookah with apparent satisfaction, and the most perfect unconcern at the misery which exists around him. In the centre, some of his assistants are bargaining for a stout robust looking negro, who lies stretched upon the ground, bound hand and foot, whilst two fellows are making an examination of his strength by beating him on his chest, to test the health or strength of his lungs, and thereby judge of his value. A little to the left of the spectator is a poor young female, evidently purchased, and suffering under the excruciating torture of branding, and the man who is applying the hot iron is performing the cruel act with the greatest sang froid. Farther to the left is a poor negro bending over the body of his wife, who appears either dead or exhausted by the suffering she has lately undergone. Behind is the driver, forcing the purchased slaves into a boat, for the purpose of conveying them to the slaver, which is lying a few miles out at sea. At the right of the African Chief, sits the owner of the purchased slaves, a man whose callousness and utter unconcern is faithfully delineated. In the background are a number of slaves who have been brought from the interior, and yoked together like beasts waiting their time to be examined. The foregoing is merely some of the principal features of this admirable representation of scenes at which humanity shudders, and which, alas, are in our own times of too frequent occurrence. As a work of art, the picture deserves to occupy a high place. The drawing and tone of colouring are beautiful, and altogether it is one of the most perfect pictures we have seen for many a day. We would advise all lovers of the arts, and those taking an interest in the abolition of the slave trade, to take a look at this picture before its removal, as we understand it is to remain for a limited time only. The engraving of this celebrated picture has been lately executed by Mr. Wagstaff, the eminent engraver. It certainly does great credit to that gentleman, and must rank as one of the finest of its class.” 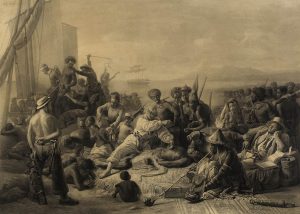