In his book, The Tenement: A Way of Life, 1979, Frank Worsdall comments:

“The most important New Town tenement to survive until recent times was Spreull’s Land, No 182 Trongate, which was built in 1784.” page 72.

He then includes a quote from Senex, which states that no such tenement had been erected on the Trongate, or elsewhere in Glasgow, and that “for years its spiral hanging ‘well’ staircase was reckoned one of the sights of the city.”

Worsdall adds: “The elliptical hanging stair in the centre of the building was certainly its outstanding feature, and was entered from a wide, arched pend which also gave access to the court behind.” pages 72-3.

The author also mentions that although the architect of Spreull’s Land is unknown, “there is the possibility that it was designed by Robert or James Adam”. (Please see entry for William Hamilton)

The drawing and photograph below, are from The Tenement: A Way of Life. 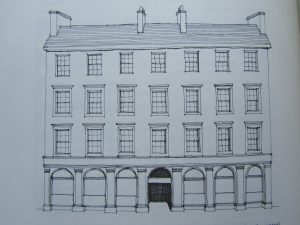