CATEGORY MENU
You are here » Glasgow's Cultural History » The Fine Arts » In 1993, Denis Mahon said: “Scotland does not have … a Salvator Rosa.” It seems he was unaware that Glasgow Museums had owned two very fine examples of Rosa’s work since the 1950s.

In 1993, Denis Mahon said: “Scotland does not have … a Salvator Rosa.” It seems he was unaware that Glasgow Museums had owned two very fine examples of Rosa’s work since the 1950s.

On Wednesday the 24th of March 1993, an article by Clare Henry, on page 15 of The Herald, examines Denis Mahon’s frustration at the way his proposed bequest of paintings to the nation was being handled. Discussing the works he intended to leave to the National Gallery in Edinburgh, he commented:

“Scotland doesn’t have a Pellegrini or a Salvator Rosa so I plan to give one of each.” 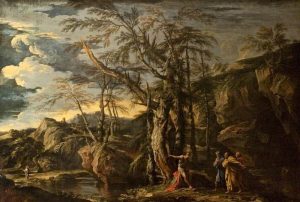 The two major landscapes in Glasgow Museums were acquired from the Palazzo Guadagni, in Florence, for James Young of Kelly. St. John the Baptist Revealing Christ to the Disciples, was inherited by his son, John, and presented to the city in his memory, in 1952. The companion picture, St. John Baptizing Christ in the Jordan, was inherited by Young’s eldest daughter, Mary Ann Walker, and subsequently by her niece, Alice Thom, who gifted it in 1953. For further information, please see Peter Humfrey, Glasgow Museums: The Italian Paintings, 2012, catalogue nos. 82 and 83. 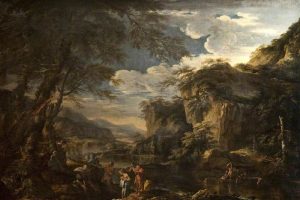 The two paintings were included in a five-venue touring exhibition, Of Heaven and Earth: 500 Years of Italian Painting from Glasgow. Organised by Glasgow Museums and the American Federation of Arts, the show opened at the Oklahoma City Museum of Art in 2013, and ended its tour at Vancouver Art Gallery in 2015. The Press Release comments that Rosa “was a passionate individualist who would influence the work of J. M. W. Turner a century later. His sublime landscape paintings of about 1655, St John the Baptist Revealing Christ and St. John the Baptist Baptizing Christ, are two of the most extraordinary 17th-century landscapes in any British collection.”