Alexander D. Cameron’s book about James Howe has the most appropriate title: The Man who Loved to Draw Horses. Published in 1986, it presents a fascinating study of the artist who was born in the village of Skirling, in Peebleshire. Growing up in the countryside, Howe was surrounded by cattle and horses, and he was fascinated by the four fairs which were held in Skirling every year, especially the Horse Fair, which took place in the middle of June. As Alexander Cameron points out, these events lived long in the artist’s memory, as he was nearly 50 when he painted the studies of Skirling Fair; the works which made him famous.

Cameron also writes about Howe’s work as a portrait painter. He gained the patronage of David Steuart Erskine, the 11th Earl of Buchan (1742-1829), who had been a pupil at the Foulis Academy in Glasgow. Buchan commissioned the artist to paint portraits of centenarians, as he believed it was worthwhile recording what they looked like for posterity.

One of the earliest records of James Howe’s works in Glasgow, is recorded in an advertisement in The Glasgow Courier, on the 11th of February, 1815. The notice informed the “Nobility and Gentry” that he had painted a picture of a hawking subject, at Barrochan Renfrewshire. It was on display, for a few days, in the shop of Alexander Finlay, Printseller to His Majesty, at 144 Trongate. The painting was to be sent to London, where it would be engraved by one of the “first artists”. Subscription papers for the print were available at Finlay’s, and potential patrons were advised that, if they wanted good impressions, then an early application was advisable, as the prints would be delivered in the order of subscription.

Another of James Howe’s greatest achievements was the paintings of panoramas. In July 1816, his Grand Panorama of the Battles of Waterloo and Quatre Bras, opened in the Large Wooden Building on the south side of Clyde Street, “nearly opposite the City Hospital”. It is extremely fortunate that a watercolour panoramic view, acquired by the Mitchell Library, incudes the structure. The detail, below, shows the rotunda which housed the panorama. 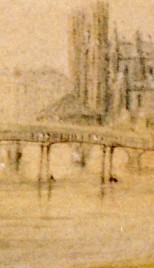