James Smith – not to be confused with his seventeenth to eighteenth-century namesake (c. 1645-1731), who pioneered the Palladian style in Scotland, or James Smith of Jordanhill, the ‘amateur architect’ – was born in Alloa in 1808, and moved to Glasgow with his family in 1826. He married David Hamilton’s daughter, Janet. In 1837, he designed the Public Baths on the city’s West Nile Street, and the Collegiate School in the Garnethill district, in 1840.

Perhaps his most famous work in Glasgow is the city-block building on Sauchiehall Street, which was commissioned by Archibald McLellan, the coachbuilder, politician and important art collector. 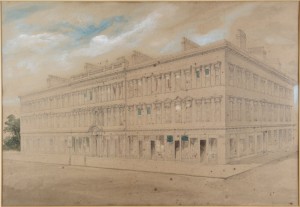 View of the Sauchiehall Street façade of the building designed by James Smith for Archibald McLellan. This watercolour is by Mark Dessurne, who taught at Glasgow’s Government School of Design, the precursor of Glasgow School of Art.

In June 1864,  The Glasgow Daily Herald has advertisements for the sale of Smith’s art collection and a portion of his library. They were to be auctioned by Hutchison and Dixon at The Mart, 7 West Nile Street, in Glasgow. The first sale was of “a very fine collection of modern paintings”, selected “with great care by the late James Smith, Esq. , Architect, and Removed from Polmont Bank House for convenience of sale.” The collection included the “Two Magnificent Paintings” by the late Alexander Nasmyth: Waterfall and View of Edinburgh. It was noted that the paintings had been exhibited, “by request” in the 1863 Glasgow Fine Arts Exhibition. This was the Glasgow Institute of the Fine Arts, and the show opened in November 1862 and ran through to January 1863.

The advertisement in the Herald, on Wednesday the 1st of June, page 8, provides the names of over 30 artists whose work Smith owned, in addition to 21 chromo-lithographs and engravings “nicely framed.” The paper noted that” The paintings cost a high sum, were collected with great care, and will be found all in the best preservation. The Glasgow Press, in noticing the above valuable Nasmyth’s works exhibited, say – ‘Nasmyth’s Landscapes contain features of great beauty, and remind us of Ruysdael and Claude’.”

The picture sale took place on the 7th of June, and the sale of books was on the 14th.

James Smith also was the architect of his country home at Rhu, which has views over the Gareloch. The property’s name has been changed over the years, by its different owners. Originally known as Rowaleyn, and more recently as Invergare, when the B-listed property was advertised for sale in The Herald, ‘Weekend Living: Property’, Saturday February 9th, 2002, page 4, as one of several ‘romantic’ houses on the market.

For further information on James Smith and his architectural works, please see: www.scottisharchitects.org.uk