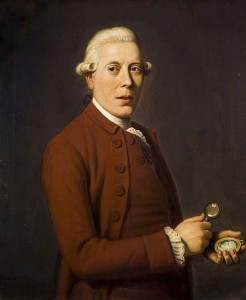 Portrait of James Tassie, by David Allan. Reproduced courtesy of the National Galleries of Scotland.

James Tassie was born in 1735 in Pollokshaws,  which was, at the time, a village to the south of Glasgow but now is part of the city. In his book about James, and his nephew William, John M. Gray comments that, “according to tradition the Tassies were of good family, and came originally from Italy as refugees, settled as tanners, skinners, and glovers on the banks of the Cart, and acquired property in Pollokshaws and its neighbourhood.”

He was trained as a stonemason, and later entered the Foulis Academy, where he studied modelling. In 1763 he moved to Dublin, a centre of the jewellery trade, and worked as an assistant to Dr. Henry Quin. Tassie learnt the art of manufacturing imitations of antique cameos and intaglios and, in collaboration, they developed a formula for a vitreous paste, which called enamel, and used for the manufacture of portrait medallions for which he became renowned. His list of sitters reads like a ‘Who’s Who’ of British Society.

Many of his portraits of patrons and friends, who lived in and around Glasgow are in the collections of Glasgow Museums, and the Scottish National Portrait Gallery in Edinburgh. The include Alexander and Elizabeth Gordon; John Anderson;  Robert Foulis; Peter Wright; and John Mair.

In May 1995, James Holloway, who was Assistant Keeper in the Scottish National Portrait Gallery at the time, wrote an article for The Herald, under the heading: “Industrious Glasgow boy who excelled in a cameo role”.

For further information, see: George Fairfull-Smith, The Foulis Press and the Foulis Academy: Glasgow’s Eighteenth-Century School of Art and Design, 2001.