James Tassie is described as “the most prolific collector and merchant of impressions of classical gems of the eighteenth century, providing sets and selections of impressions in a variety of materials. His collection is the most comprehensive of its day”, in the entry for him in the University of Oxford’s Classical Art Research Centre website: www.beazley.ox.ac.uk. It also points out that, although Raspe’s Descriptive Catalogue is widely accessible, complete sets of the impressions are known only in Edinburgh, London and St. Petersburg, where Catherine the Great ordered a set in 1783. The aforementioned website has photographs of the impressions owned by the Victoria and Albert Museum, in London.

In 1995, Mallett, one of England’s oldest dealers in fine antiquities, and based in London, mounted an exhibition of the work of James Tassie and his contemporaries. The accompanying publication, John P. Smith’s James Tassie 1735-1799 Modeller in Glass: A Classical Approach, 1995, is sumptuously illustrated and excellently researched. 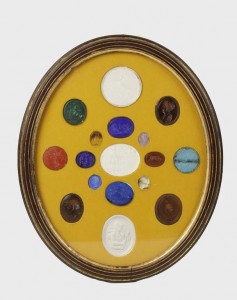 A collection of sixteen coloured and clear gems, mounted in a frame.