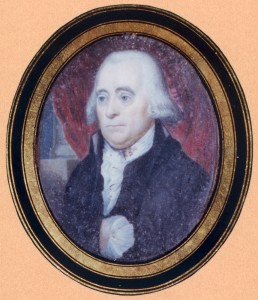 Miniature portrait of Peter Wright, by an unknown artist. Reproduced courtesy of The Royal College of Physicians and Surgeons of Glasgow.

Peter Wright was admitted to the Faculty of Physicians and Surgeons in 1766, and was its President five times between 1771 and 1806. He was a friend of Professor John Anderson, and named by him in Anderson’s  proposal for a new university in Glasgow. He was a subscriber to Raspe’s A Descriptive Catalogue of A General Collection of Ancient and Modern Engraved Gems, 1791.

Wright also contributed to our knowledge of David Allan and some of the art collectors, based in and around Glasgow. In October 1804, a query regarding the late David Allan, “the Scottish Hogarth”, was published in The Scots Magazine. The Edinburgh-based correspondent asked if any of the journal’s correspondents could “furnish any memoir” about the artist as they did “not believe that any account of him was ever published”.

In December 1804, The Scots Magazine published information provided by Dr. Peter Wright, and it contains some fascinating details. In addition to referring to what had been published about Allan in the Edinburgh newspapers, following his death in 1796, Wright refers to what he owned himself, and bound up with a copy of Allan Ramsay’s The Gentle Shepherd, with a proof impression of the plates, which David Allan had presented to Wright.

The doctor also referred to works owned by John Mair of Plantation.