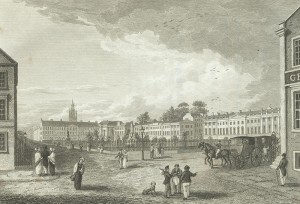 This view of George Square from the south-east corner, was drawn by John Fleming and engraved by Joseph Swan. In the text, it is called “George’s Square”, and John Leighton describes the buildings on the four sides:

“The interior of the square is very tastefully laid out with trees, shrubbery, and flowers, intersected by numerous gravel walks; and in the centre it is intended to erect a light dome, supported on pillars, having under it a basin, with a jet d’eau, or cascade of water. In the middle of the south side of this area, opposite the head of South Hanover-Street, and thus seen up Miller-Street, from Argyle-Street, a very fine monumental statue has been erected to General Sir John Moore, the much lamented hero of Corunna, one of Glasgow’s dearest sons, and most boasted honours. The monument consists of a pedestrian statue of bronze, seven feet high, placed on a circular pedestal of Aberdeen granite, about ten feet high. Flaxman was the artist employed, and he has produced a specimen of art, alike worthy of his own high genius, and of the sacred purpose to which it was to be devoted. The figure is standing upright, uncovered, with the right hand resting on the top of a sheathed sword. The awkward stiffness of our modern dress is finely concealed by the drapery of a military cloak, thrown gracefully around the person, and falling easily and naturally down. It is said to be an exceedingly correct likeness. General Moore was, we believe, born on the north side of the Trongate, a little east from the Candleriggs.” pages 204-5. 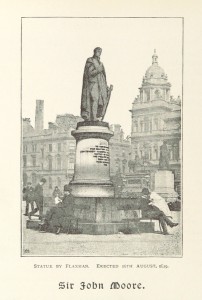 Photograph of the Moore monument. It shows the sword, subsequently lost.