CATEGORY MENU
You are here » Glasgow's Cultural History » The Fine Arts » The Foulis Exhibition at the Mitchell Library, Glasgow, 2001

The Foulis Exhibition at the Mitchell Library, Glasgow, 2001 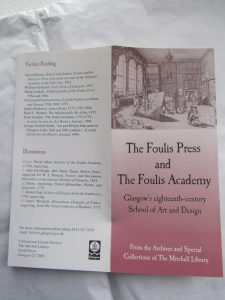 Flyer produced to accompany the exhibition.

In 2000, I proposed researching material relating to the history of Glasgow’s pioneering Foulis Academy, and approached Enda Ryan and David Freckleton, at the Mitchell Library. I had collaborated with them, and other staff at the library, on creating small displays about Joseph Swan, Thomas Annan, David Hamilton and John T. Rochead, and the major Glasgow Illustrated exhibition in 1999.

The Mitchell owns the largest collection of prints acquired for the Academy, as well as prints produced by its pupils. The library also has many of the books produced by Robert and Andrew Foulis, at the College on the High Street.

Much to my delight, I was asked if I would be prepared to work on a larger show, which would be mounted in the large exhibition space. I said yes, as this was a golden opportunity to make the library’s collection better known to the public.

As it was an important cultural event, I thought it would be the perfect opportunity to produce a booklet which could help to promote the collections and allow the visitors to the exhibition to have some record of it. Initially, this publication was to be produced by the Mitchell, but, unfortunately, the person assigned to the work was unable to commit to the project for personal reasons. I believed that the opportunity to create a publication would be lost, but, with the support of my mother, David Weston of the Special Collections Department at Glasgow University Library, the Friends of Glasgow University Library, David Freckleton, Enda Ryan, their colleagues at the Mitchell, and others involved in the exhibition as lenders and owners, it was possible to make a publication based on the exhibition text..

Although I had experience of collaborating on exhibitions and providing text for associated publications, this was the first time I had entered the world of private publishing. Initially, it was something of a mine-field, especially when dealing with a printer who saw an opportunity to take advantage of someone who was new to this. Happily, I soon was directed to a much more professional firm of printers, and although the time-scale meant the book would not be available before the exhibition closed, flyers were produced to promote it, and there were many advance orders, which was wonderful for all of us.