William Buchanan is one of the most important figures in the history of art dealing, speculating, and collecting, and was a member of one of Glasgow’s leading families. His parents were John Buchanan of Ardoch  (1733-89) and Helen Graham, and he was born at Dalmarnock, an estate at that time to the east of the city. 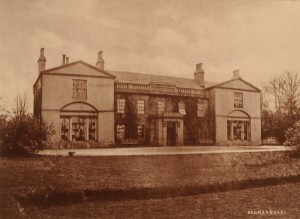 ‘Dalmarnock’, photographed by Thomas Annan, for The Old Country Houses of the Old Glasgow Gentry, 1878.

He trained to be a lawyer, but ended up becoming an individual responsible for selling to some the most important art collectors in Scotland and England. In Dates he published his tw0- volume Memoirs of Painitng. In this essential work, Buchanan outlines the

An especially interesting aspect of his life was his relationship with his brother-in-law, the Glasgow-based West India merchant, Alexander Gordon. Alexander lived in a mansion on Buchanan Street, and it was there that he displayed of Old Master and modern paintings. Many of these had been imported from Italy by Buchanan’s agent, James Irvine, a fellow Scot.