CATEGORY MENU
You are here » Glasgow's Cultural History » Theatre » Billie Barlow in “The Bicycle Girl”, at The Theatre-Royal, Glasgow, May 1897

Billie Barlow in “The Bicycle Girl”, at The Theatre-Royal, Glasgow, May 1897 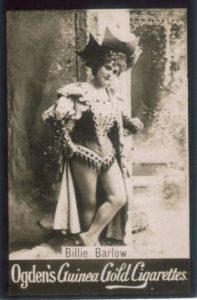 In May 1897, she starred, along with Horace Mills (1864-1941), in the musical comedy The Bicycle Girl.  The show opened on Monday the 10th of May, and ran for six nights. A review in The Glasgow Herald, on Tuesday the 11th of May, page nine, commented:

“The public taste for musical comedy appears to be insatiable. Of late the list of these productions has been considerably extended, but notwithstanding this a large audience at the Theatre-Royal last night warmly welcomed  still another musical comedy, ‘The Bicycle Girl,’ which was staged for the first time in Glasgow. It is described as a new and original musical bicycle comedy, but, with the exception that the machine named plays a prominent part throughout the customary two acts, the piece has been composed on the usual lines.

“The representation of the comedy has been entrusted to a capable company. Miss Billie Barlow and Mr Horace Mills are the leading members, and they are responsible for much of the success of the piece. Miss Barlow is a capital Atlanta, the Bicycle Girl, and plays with the requisite dash. The eccentric genius of Mr Mills finds ample scope in the character of Alphonso Burke, a sleepy and indolent page-boy. Both Miss Barlow and Mr Mills contribute some characteristic songs and dances …”

Advertisements for the show, such as the one on page six of the Herald, on Monday the 10th of May, describe Billie Barlow as the “Famous Burlesque Actress.”