Death of Campbell Gullan, Glasgow-born Actor and Producer, in December 1939 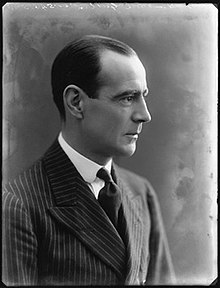 Campbell Gullan (1881-1939), the Glasgow-born actor and producer, died in London on the 1st of December 1939. His death notice on the front page of The Glasgow Herald, on Monday the 4th of December, and his obituary on page nine of the same issue, provide useful information about an all-but-forgotten individual.

“The death has taken place in London of James Douglas Campbell Gullan, known to theatregoers on both sides of the Atlantic as a front-rank actor and producer.

“He was a man of striking versatility and of undoubted ability. He started his stage career as an amateur in Glasgow, and with the Glasgow Repertory Theatre Company graduated to the London Pavilion, where he first appeared in a song-and-dance act, and later he took such varied parts as Trigorin in Chekov’s ‘The Seagull’ – a part he ‘created’ in English – and Collie, the Scottish journalist in Edgar Wallace’s famous thriller, ‘The Squeaker.’

“In the years 1909 to 1911 Campbell Gullan was associated with the Glasgow Repertory Theatre Company, where he appeared in many productions, playing roles such as Hooligan in ‘Whose Zoo?’ Andrew Purdie in ‘Barbara Grows Up,’ Trigorin in ‘The Seagull,’ and Hector Frome in ‘Justice.’

In 1911, he made his first appearance on the New York stage as Tammah Biggar in Graham Moffat’s “Bunty Pulls the Strings.” He played that part in tours of the United States and the United Kingdom, and also produced numerous plays in New York, including “Pickwick,” “Interference,” and “Caste.” Gullan directed a wide variety of films, which ranged from broad farce to such historical panorama as “Clive of India” and “Elizabeth of Austria.”

The Herald included, in an appreciation:

“With the death of Campbell Gullan the theatre has lost one of those talented yet shrewd personalities that are all too rare in that land of make-believe. This Scot never let showmanship swamp his sanity, yet he loved the drama, and he bestowed on the art greater kindness than it has received from many of its more flamboyant sons.”

Campbell’s sister, Marjorie, was a well-known Glasgow elocutionist and lecturer on speech training.