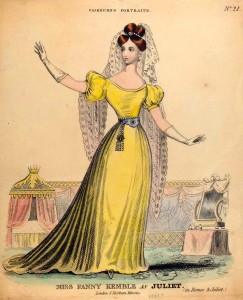 Fanny Kemble performed one of her most famous roles at the city’s Theatre Royal, Dunlop Street, in June 1830. An advertisement in the Glasgow Herald, 21st June, notified readers that Fanny and Charles Kemble would appear, for three nights only. They were in Shakespeare’s Romeo and Juliet on the 28th of June; in the  tragedy of The Gamester on the 29th; and the tragedy of Venice Preserved on the 30th.

In another column in the Herald of the 21st of June, it was noted that the “celebrated Miss Fanny Kemble, and her father Mr. C. Kemble, are engaged for three nights, at the Dunlop-street Theatre …”