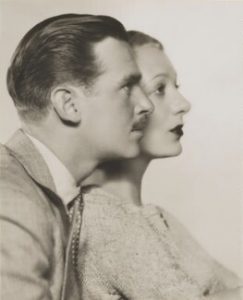 In May 1934, Gertude Lawrence (1898-1952) and Douglas Fairbanks Junior (1909-2000), starred in The Winding Journey, a new play by Philip Leaver, which had its premiere in Manchester a fortnight before the show opened in Glasgow on the 21st of May.

Advertisements in the Glasgow press spell the playwright’s first name “Phillip”, as does the writer of the review which was published on page ten of The Glasgow Herald, on Tuesday the 22nd. The second paragraph reads:

“The very large number of playgoers who were attracted to the King’s Theatre last night to witness the opening performance in Glasgow saw a notable display of acting, of which Miss Lawrence has the heavier share, though the memory of the emotions, which are so well coloured by the two principals, is hardly likely to remain long in the mind after the play is over.”

The subject of the play is “the modern marriage with its freedom and its disaster,” and the Herald’s critic provides an outline of the plot. In the role of Deirdre Brummel, “Miss Lawrence imbues the role … with success.”

“Her reactions to matrimony change swiftly, and the varied display of emotions which she gives is impressively real. Ardent love-making, caustic banter, rage, despair, sympathy – all are invested with a naturalness which is most convincing.”

In his performance as Michael Robbins:

“Mr Fairbanks, the cause of all these emotions, worthily responds. As the temperamental husband he gives a masterly study, his acting, particularly in the later stages, being full of high dramatic qualities.”