James Sheridan Knowles and the Necropolis 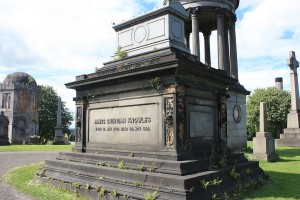 He had often, in speaking of “the city of his affections, “expressed a desire, when his end should come, to be buried there. And now, a very aged man, so changed from the fiery piece of humanity which once bustled along its streets, he visits the Necropolis, and looks around him on the graves of many who had gone before him – some of his “boys” possibly among them – and especially on that of his old friend Stevenson Dalglish. On this same spot – this hill of tombs – he says he would like “to take his own last rest, when his time should come.” It came a few months later [James died at Torquay on Sunday 30th November, 1862]; and on the 5th of December, 1862, he was buried on the spot he had selected, some forty friends following him, amongst whom were Robert Dalglish, M.P., Sheriff H. G. Bell, and one of the earliest of his Glasgow “boys” Thomas M. Mackay.”