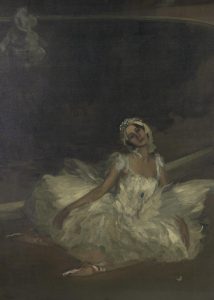 On Tuesday the 21st of November, The Glasgow Herald, on page seven, provided its readers with a positive review of Pavlova’s first night at the King’s Theatre.

“Madame Anna Pavlova, who last night appeared before a packed King’s Theatre, is a great artist, and her appeal is on the highest level. Her technique is wonderful, but it is always under artistic control, always directed to the ends of interpretation. Such dancing is worthy of a place beside the best music, and indeed owes most of its charm to the subtle way in which it interprets music’s mood. Madame Pavlova’s art, it is true, is based on the dancing of the schools, with its inverted muslin saucers, its whirlings, and its posturings on tip-toe; but it is as unlike the dancing of the ordinary ‘première danseuse’ as it could well be. The dancer can also give us the Greek type of dancing, and some of her most charming performances last night were in this form.”

The critic describes some of the dances, including ‘Automne Bacchanale’ when “the dancers gave an extraordinary exhibition of wild, riotous movement, yet with a poetry as subtle and beautiful as that of Keats.” 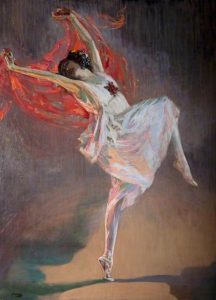 “Madame Pavlova’s solo dances were Saint-Saëns’s ‘Le Cygne,’ describing the death song of the swan, and ‘Le Papillon,’ by Drigo, a trifle all fluttering light and colour. The gossamer art of Madame Pavlova, however, is not one that can be described. Her performances were a delight from first to last and they left one with the feeling that with her dancing says its last word. Her Glasgow audience confirmed enthusiastically the flattering verdict of audiences all over Europe.”