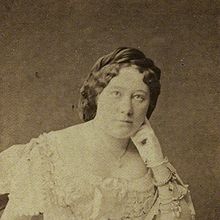 Miss Sedgwick was engaged for twelve nights at the Theatre Royal, in November 1866. The newspaper advertisements informed readers that this was her first appearance in Glasgow, and she was to appear as ‘Julia’ in The Hunchback on the 12th; ‘Constance’ in Knowles’s The Love Chase on the 13th; then in The Stranger; The School for Scandal; The Lady of Lyons; Macbeth; The Honeymoon; and An Unequal Match, a comedy specially written for the actress.