In November 1864, the Glasgow newspapers informed readers that Miss Bateman, “the great TRAGEDIENNE”, was engaged for twelve nights only, and would “make her First Appearance in Glasgow on MONDAY, 28TH NOVEMBER, In her celebrated character of LEAH”, which she performed at the Royal Adelphi Theatre, London. 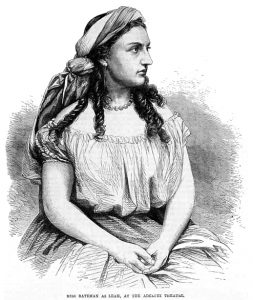 On Saturday the 26th of November, The Glasgow Herald commented, on page four:

“MISS BATEMAN. –  We have much pleasure in drawing the attention of our readers to the forthcoming engagement of Miss Bateman, which commences at the Theatre-Royal on Monday evening. The lady has won for herself in a few months the name of a great actress, in her far-famed character of Leah, which has created quite a furor in London and the principal cities of England and Ireland. The piece ran for upwards of 200 nights in the metropolis with undiminished enthusiasm, fairly eclipsing the Dundreary excitement some time before. In Birmingham the rush was so great that the manager of the theatre had to turn the pit into boxes and the gallery into stalls. In Dublin and Manchester her reception was also most cordial, and the English and Irish Press have almost exhausted the language of panegyric in sounding her praises. We have to thank the management of the Glasgow Theatre-Royal for giving the citizens an opportunity of seeing and hearing this distinguished actress; and from all that we can hear we have little doubt that the engagement will be most successful in every respect.”