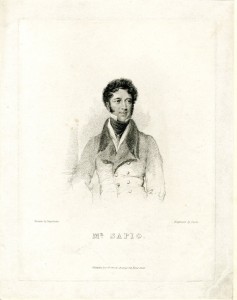 Mr. Sapio, the Celebrated Vocalist of the Theatre Royal, Drury Lane, was engaged by Mr. Seymour, for two nights only, to perform in the opera The Siege of Belgrade, at the Theatre Royal, Queen Street. He took the role of the The Sereskier. See the Glasgow Herald, 15th August, 1825, page 3. The first performance was on the 16th of August.