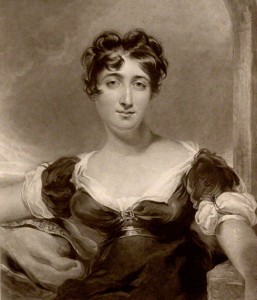 Born Maria Rebecca Duncan, the daughter of actors, she was a child performer, playing cupids, fairies and hobgoblins. Growing up, she made a number of stage appearances.

In 1805, she ‘created’ the role of Juliana in John Tobin’s The Honey Moon. It is the character for which she is best-known. In 1812, she married James Davison, and thereafter performed as Mrs. Davison.

Rebecca was taller than average, and had dark hair, along with strong and expressive features. With a fine voice and good knowledge of music, she was renowned, and unequalled, in her day, for singing Scottish ballads including John Anderson and Roy’s Wife.