CATEGORY MENU
You are here » Glasgow's Cultural History » Theatre » Mrs. Glover, in ‘The Belle’s Stratagem’, at The Theatre Royal, Queen Street, in 1810

Mrs. Glover, in ‘The Belle’s Stratagem’, at The Theatre Royal, Queen Street, in 1810 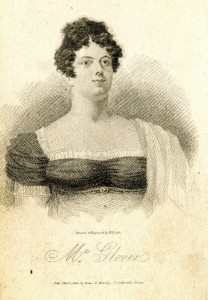 On Friday the 19th of January 1810, an advertisement in the Glasgow Herald, page 3, for Madame Catalani’s performances at the Theatre Royal, Queen Street, informed readers that the “favourite Comedy” of The Belle’s Stratagem would open at the theatre on Monday the 22nd of January, with Mrs. Glover playing Letitia Hardy.

In February, Mrs. Glover informed her friends and the public, through newspaper advertisements, that her ‘benefit’ would take place at the Theatre Royal on Wednesday 21st of February. She would perform in Know Your Own Mind, a comedy, along with a variety of entertainments, “never acted here”, and a “Grand Romantic Melo Drama”, called The Wood Demon; Or, The Clock Has Struck With new and splendid Scenery, Machinery, Dresses, and Decorations”. Tickets could be had of  Mrs. Glover at Mr. Phillip’s, Arthur’s Land, No. 2 Stirling Street, and “at the usual place”.

She also appeared in the comedy The World, alongside Mr. Bannister, Mr. Bartley and Mr. Rock, on the 28th of February. See the advertisement in the Herald, page 3, on Monday the 26th of February.