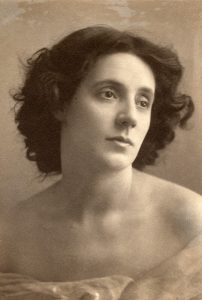 A review of Mrs. Patrick Campbell’s performance as ‘Hedda Gabler’, was reviewed on page ten of The Glasgow Herald on Wednesday the 11th of September, 1907. The critic opened with the following:

“The dimensions and character of the audience at the King’s Theatre last night may be taken as an indication that Ibsenism is dying (if indeed it be not already dead) and that Ibsen, the dramatist, is coming into his own. Time was when Ibsen performances were like congresses of select cults, attended only by long-haired men and short-haired women with the earnest, if haggard, eyes of the emancipated. Then Ibsenism was the source of many dull lectures and more foolish theories. Now that Ibsen drama is presented to the multitude the cult of Ibsenism has ceased to be aggressive. No eccentrics were to be observed at the King’s Theatre last night; it was simply the type of the ordinary sane audience who go to a play because they are interested in it, and not to seek the sensation of a new gospel. It was a large audience who followed closely the brilliant performance of the tragedy of ‘Hedda Gabler’ by Mrs Patrick Campbell and her company. And it was pure drama, as well as great acting, that riveted the attention.”