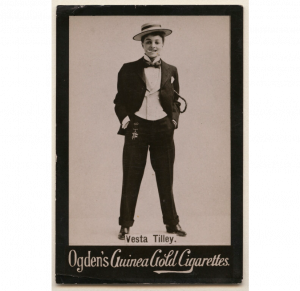 Photographic portrait, published in the late 1890s by Ogden’s. Reproduced courtesy of the National Portrait Gallery.

Vesta Tilley was the stage name of Matilda Alice Powles (1864-1952). She was one of the most successful music hall entertainers, and a renowned male impersonator, often portraying young men behaving badly, or in an embarrassing manner. Tilley also played the role of principal boy in pantomimes.

She was the star attraction on the opening night of the Empire Palace Theatre, on Monday the 5th of April, and the Herald’s theatre critic commented, on page nine of the following day’s paper, that she “had a great reception … sang admirably, and was peremptorily encored.”

The rest of the cast included: the acrobats, Willie and Charlie; Fred Millis, the ventriloquist; the mimic Syd May; the Olive Trio; the Gianinni Sisters; and the Ivanoff Troupe, among others. Tilley, and her fellow entertainers continued to delight their Glasgow audiences through to Saturday the 17th of April.