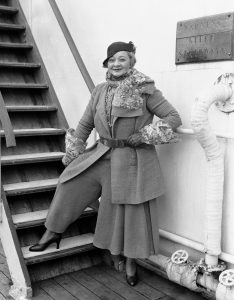 Sophie Tucker (1886-1966), who was described as “The First and Last of the Red Hot Mommas,” in advertisements in Glasgow newspapers, was starring at the city’s Empire Theatre, for one week,  from Monday the 2nd of July, through to the Saturday. There were two shows daily, one at 6.40 p.m., the other at 8.50 p.m., with the “Support of a Strong Variety Company.”

A notice on page ten of The Glasgow Herald, on Tuesday the third of July, commented:

The summer season may be considered as the dead days of the theatre in Glasgow, but music-hall entertainment seems to be impervious to that belief. At the Empire this week a strong variety programme has been built up of widely varying material, and last night attracted a large audience. Sophie Tucker heads the bill, and certainly the technique of her performance leaves little to be desired. She ‘puts over’ her songs, not by any pleasing quality of voice, but by actions and facial expression which stamp her words with real meaning. The audience enjoyed her numerous numbers. ‘Wise-cracking’ is the word which best describes Ted Ray’s item, though he produced many gags which were the reverse of wise, but none the less smart. Turning from speech to action, the comedy acrobats Pasqui and Peru introduced one or two novel tit-bits, including a little yodelling. The Five Cleveres showed a different type of acrobatic activity, and certainly provided quite a number of the thrills they promised on the programme. Donald McKay added a Scottish note to the proceedings, and the other items included Clifton and Velette, clever tap dancers; an amusing couple, Payne and Hilliard; Ray Vaughn, an American xylophonist; and Raymond Smith, ventriloquist.”

An advertisement for the Empire, on page thirteen of the 6th of July’s Herald, informed readers  that Tallulah Bankhead would be heading “Another Great Variety Bill” the following week.