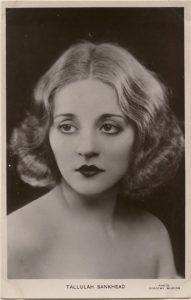 “TALLULAH BANKHEAD AT THE EMPIRE” is the heading of the review of the show on page seventeen of The Glasgow Herald, on Tuesday the 1oth of July, 1934.

“The one-act sketch in which Miss Tallulah Bankhead appears at the Empire Theatre, Glasgow, this week is a trifle with limited scope for an actress of her distinction. Her glamorous acting in the days before she went to Hollywood won her countless admirers in every city of importance in Britain, and her very name attracted many to the Empire last night.

“Miss Bankhead’s personality does much to earn ‘The Snob’ the appreciation of the audiences. The sketch has a lesson for social climbers, and makes the absence of sham the test of a gentleman. It is skilfully woven although slight in construction, and calls for nothing but straight acting. The other players are Bernard Nedell and Cameron Hall.”

“The Famous Stage and Screen Star” was at the Empire from Monday to Saturday, and there was a “Strong Variety Bill”, which included: Stewart and Olive, American dancers; the Moxham Brothers, who performed tricks on a cycle; and Wright and Marion.